The prettiest flower to come out of the weirdest looking bulb. Actually, it’s technically a tuber not a bulb so it’s more related to a potato than a tulip. But really nobody cares what’s going on below ground, if you’re not familiar with dahlias you need to get to know them. They are the most amazing group of flowering plants that add a little bit of tropical spice to your outdoor space. Native to Mexico and Central America while they look exotic and tropical, they are easy to grow. The ratio of effort required to reward reaped is high with these plants.

To say dahlias are variable is putting it mildly, this is a plant that has been hybridized and bred so much they need to be classified into groups. The Royal Horticultural Society maintains an International Register of Dahlia Names and according to them there are over 57,000 registered cultivars that are classified into 14 groups. But every year about a hundred new cultivars are added… so you can be forgiven for not knowing them all. They are separated based on their flower shape: singles, anemone-flowered, waterlily types, decorative, cactus, pompon, ball, peony flower, etc… the list goes on. And that doesn’t even touch on the ones with beautiful bronze and burgundy foliage. If you want to do a deep dive into dahlias, or are interested in becoming a collector/devotee then check out the RHS or a local dahlia society and get to know the different classes. But if like me you are just in it for the pretty flowers/foliage then do what I do and think of them more as sizes. They come in small, medium, and large in both plant and flower size. There are compact dwarfs perfect for a pot, stately giants that can tower above other plants the back of a border, and everything in between. And the flowers, from diminutive pompoms at 5cm (2”) in diameter to 30cm (1”) well-named dinner plate dahlias. Once you know what size you need then start looking for the flower colours and shapes that appeal to you. 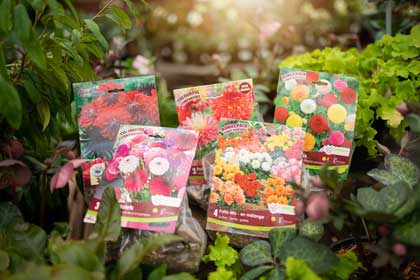 If you can grow tomatoes, you can grow dahlia. Neither of them do well in cold soil so make sure all danger of frost has passed before you plant them. So, when it’s safe to plant tomatoes it’s safe to plant dahlias and vice versa. So, I know it’s a bit early right now but you don’t want to miss out on all the good selection so now is the time to buy your tubers. Plant them out when the soil warms up and enjoy the flowers from midsummer through to autumn, when the flush of spring has past and the garden often needs a boost. If you have a short growing season then you can start them indoors in a pot if you want a jump on the season, but it’s not necessary. In fact, dahlias are great for containerizing so if you don’t have a plot of land then don’t worry. Get a smaller variety and plant it in a container to enjoy on the deck or patio.

Dahlias need lots of warm sunlight (native to Mexico remember), with moist but well-draining soil. They are susceptible to rot, so much so that it is recommended you don’t water them after planting until you see shoots erupting from the soil. Generally speaking, you want to plant the tubers about 10-15cm deep, but really you need to read the packaging the tuber comes. Remember that some of the bigger varieties may need staking, so be sure to install that at planting time. Tomato cages do double duty as perfect dahlia supports.

One thing you should be aware of is aphids are also very fond of dahlias. I get aphids on my dahlia every year. It’s not the kind of thing to panic about but just pay attention, they like to hang out on the tip of the stem right underneath the flower bud. If you don’t pay attention, they can get out of hand pretty quickly. Often, they can be dispatched with a squishing from the gardener's fingers (use gloves, it’s a bit gross but strangely satisfying at the same time) or a blast from the garden hose (just make sure you don’t blast your flower as well). If these tricks don’t work for you then head down to GARDENWORKS and one of the knowledgeable staff can help you find something to do the trick.

Once the flower dies make sure to deadhead. In addition to deadheading there is something called disbudding. This is when you remove the two smaller flower buds (of the three flowers per stem) leaving the centre flower to get all the resources and grow as large as possible. Personally, I don’t disbud because I like more blooms not just big ones, but you can choose your own dahlia adventure. 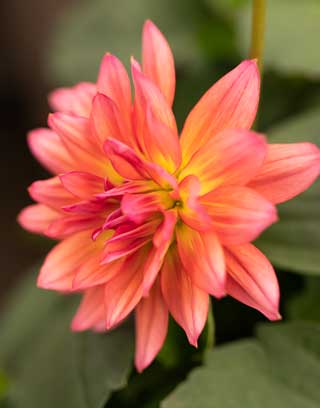 Technically a perennial dahlias are often treated as annuals, but they don’t have to be. The tubers are only hardy to USDA Zone 8, but being tubers, they are well suited for dormancy. If you live in a mild area (Zone 7-8) and you’re a gambler (or just lazy… I don’t judge) then you may want to leave them in the ground and hope for the best. But if you live somewhere colder or want to make sure to have them year to year you need to dig them up, store them for the winter and replant each spring. It sounds like a lot of work but really, it’s not. In the fall once the foliage has died back but before the frost hits, carefully dig them up and allow them to dry. Do not wash them or they will rot. Cut off any nasty or rotten bits, brush the soil off, and store in a cool (frost free) dry place. They will be ready to plant again next year.

So, it seems like none of us are going to be heading to any tropical locations this year, instead bring the look of the tropics into your outdoor space by planting some dahlias. If we can’t go to Mexico then bring Mexico to you, it’s easier than you think.

Backyard Tree Care in the Okanagan